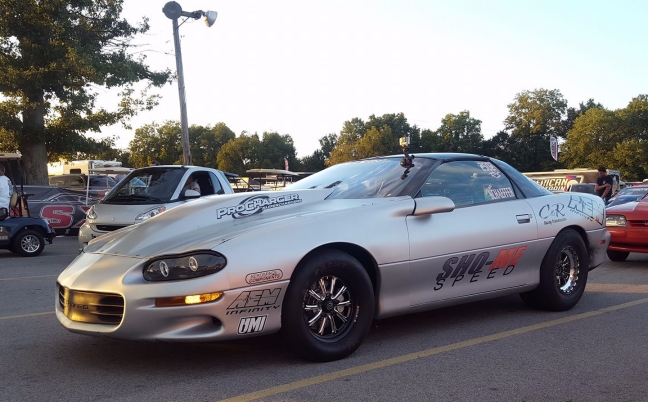 Kimmy’s Garage would like to highlight John Schaeffer and his car, Silver Juice!

His car, appropriately named Silver Juice based on its silver sheen, is fully equipped with a Dart Ls Next from Mike Lough Racing Engines. Diamond Pistons came on board last year and John and his team are currently testing the LSK pistons that are a great off-the-shelf-piston, paired with a Cam motion cam and Mast Cathedral heads to drive air from the F1X Procharger to maximize the power. The suspension is UMI full suspension with a Midwest Chassis Torque arm and AFCO race shocks on all 4 corners to drive the cars 1.17 60fts. Last but not least, in order to achieve ‘lightning fast stopping power’ on the car, John proudly has Aerospace Brakes installed all around his car.

“The Aerospace shifter has been a game changer for me”, John shared. The short shifting stroke and having it wired to the ECU to shift at the optimum RPM gives John the extra edge when beating the competition on close races. His family was also relieved he installed Aerospace brakes, considering his chute didn’t deploy during a run, but thankfully he was able to stop with no issues.

“I trust Aerospace Brakes every time I pull up to the tree to release the trans brake on my Pro Eliminator shifter!”

John and his team are thrilled with the new upgrades on the car this year; including titanium valves, Procharger Volute, Firecore wires, PTC Stall, and AEM wide bands for better tuning capability. With all of these upgrades complete, John is expecting to see 4.5xs out of the car this year on a 275 drag radial.

His ultimate goal this year is to win some big upcoming races! John has his sight set on hitting 4.60s in the car and getting the 60ft down to the 1.10 range. They’re running the X275 series and will look at doing the Street Outlaw class at Indy, which is similar to the X275 class they currently run now. Another goal for John? To complete in the NMCA races & get in the Aerospace Component’s Winners Circle!!

With a packed racing schedule ahead of John and his team, including the upcoming No Prep Street Car Showdown on June 30th at Ozark Raceway Park, he is prepared and ready to continue his streak and strive for victory!

We wish John and his team the best of luck for the remainder of the racing year!

Congratulations on Runner Up Holley LS FEST 2019 !!!!  So Awesome,John

Kimmy’s Garage is now looking forward to partnering with you to help promote and sell your product line. Let’s get started!